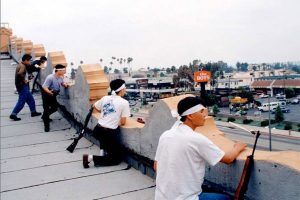 Women and children are being shot to death in cars in broad daylight. That’s the fallen world in which we are currently living. Not four months ago, three women and six of their children were murdered while driving in Mexico. They were dual American-Mexican citizens and Mormons, though not part of the Church, and had been living in that part of Mexico for decades, some even over a 150 years. With the inexcusable lawlessness abounding in Mexico, this group had to establish cordial relations with one of the powerful criminal cartels that controls the region virtually unmolested by the effete Mexican government. This of course put the Mormon community at odds with other cartel groups. They knew the risks and so traveled in caravans, hoping that though unarmed, large groups would help them ward off hostile attack. It failed. These barbaric cartels are fine with butchering anyone be it man, woman, or child regardless if they are a threat or not.

This situation has parallels to another famous incident, though with a different outcome. It was April 1992 and the city of Los Angeles was being rocked by huge riots. This wasn’t just some rowdy crowd breaking windows and cars. These were roving, dangerous mobs burning down homes, robbing, pillaging, and murdering. It was almost a week before control could be restored and the citizens were basically on their own to face the mobs during that time. A lot of the city was either burnt down or vandalized, but one section wasn’t despite being in the midst of the riot.

Los Angeles’s Koreatown is, as you would guess, home to many Korean immigrants. They had long been the target of prejudice and anger, especially by the black community, and so were a target in the riots; however, the residents of Koreatown knew this and prepared accordingly. They grabbed their rifles and climbed to the roofs of their shops and homes and dared anyone to come near. Having been trained in the Korean army as all Korean men are, they knew how to use their weaponry effectively and weren’t afraid to shoot. The mobs avoided them for easier prey and the men in Koreatown kept their families and property safe. The fact that many other Korean shops and homes were destroyed shows that the threat was indeed real.

The Book of Mormon has many passages emphasizing the importance of protecting one’s family (see for example Alma 43:47 and 3 Nephi 2:12). In our progressively worsening world, this commandment is even more important to follow now. We can’t defend our families if we are not prepared to do so. This of course includes spiritual threats, but ever increasingly it also means defending them from physical harm.

We can’t expect to always live in a time when Church members will be given fair protection and representation before the law. We also can’t expect to always live in a time where the government can enforce laws. Mexico already attests to that. Cities are making it easier for felons to dodge violent crime sentences, and with the rise of chapels being set on fire, it’s only a matter of time until members start being attacked in the USA just for not keeping in line with mainstream acceptance of sin. Political and ethnic tensions also are high. Another riot like in L.A. could break out anywhere, and how would we protect ourselves? Are we prepared like Koreatown was?

It’s our responsibility to prepare to defend ourselves. How exactly do we do that? Again, we can look to the scriptures as well as church history. The Lord Himself said, “[H]e that hath no sword, let him sell his garment, and buy one.” Nephi prepared swords for his people so that they could defend themselves (2 Nephi 5:14). Joseph Smith created a militia to protect the members of the Church, and Brigham Young directed a militia to protect members in Deseret. Applying these to ourselves, we should have weapons for self-defense, know how to use them, and be organized so that we can fend off attacks from any person or group who would deprive us of our rights to live and worship as we please.

If possible, every brother of the Church should own a gun. If you can’t get a gun, get some other means of protection, even if just a bat, but it should be an eventual goal that brethren form militia communities with a militia armory. The Lord expects us to be warriors and protectors. It used to be true that every American man could be expected to know the basics of firearm use, but that is but a distant memory today. We can’t allow the brethren to be defenseless lambs when they should be the shepherds guarding the flock. Other churches have been attacked by wicked children of Satan wishing to kill as many as possible. The most recent, an attack in Texas, was stopped by members carrying firearms. Are we prepared to do the same to protect our churches and families? Soft targets invite attack, while hard targets fend off marauders.

It’s not enough to just have a gun. Get into shape so that you can be physically ready. Better yet, work out with other brethren. Be constantly vigilant because the enemy is looking for whom he can devour. (1 Peter 5:8). Teach your children and younger members how to be safe and avoid danger. Teach them how to protect themselves. Also important is developing a sense of community. The Koreans didn’t act as individuals. They were a group and protected each other like a group. It’s every members responsibility to foster community ties and uplift each other. We are one body in the Church and should always be looking out for each other.

It is every man’s duty to defend his family and community, and anyone who shirks this will be held to account by the Lord. The Lord won’t let us go it alone though. Be prepared and the Lord will bless you and help you to protect what’s yours.