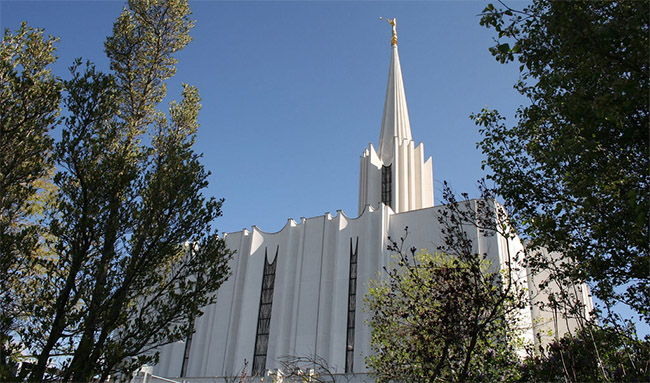 The Anti-Mormon individual responsible for the hidden camera temple videos that are on Youtube has said that he gave phony temple recommends to pornography actresses who have been in the temple and recorded footage. He suggests this was is in retaliation for the church pressing charges on him for trespassing. 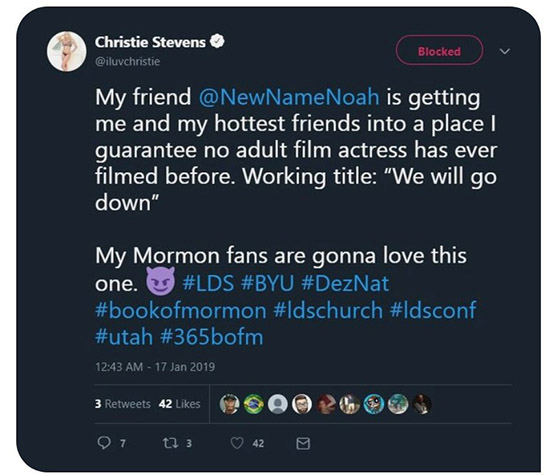 The Anti-Mormon published this threat:

“I never said I wouldn’t sell them [temple recommends] to an adult film production company and give a small group of adult film stars a little training on how things operate in the temple so they won’t stand out. I may also have drawn them maps of a few temple interiors. If Mormon Jesus is not only not going to forgive my trespasses but actually aggressive [sic] prosecute me for stepping on his lawn… I’m going to show Mormon jesus how bad things can get for them. I suggest they hire a LOT more security. They’re going to need it.”

Well, another post hints at the worst. In a rant against fellow Anti-Mormons, he said, “I can mock Elohim and record #sacredNOTsecret religious ceremonies and post them online and 99% of the Exmo’s are totally fine with it, but if two women have sex in the same room later that night after a bribed security guard lets them in everyone goes ape***.”

As a top revered leader in the Anti-Mormon community, this stunt was met with mixed reactions. On the Ex-Mormon Reddit, one person simply responded “Nice.” On Twitter, an Anti-Mormon used it to tell disgusting lies about church history: “I’m just going to remind everyone that polygamous marriages were consummated in the temple back in the day. So, I find it difficult to condemn consensual sex inside a temple when child rape was their common religious practice.” Another Anti-Mormon on Twitter defended the stunt by citing Nephi and Laban, “Wow, you’ve never read the Book of Mormon have you? It’s not like @newnamenoah cut off somebody’s head so he could steal their property. But lesbian sex is going too far? What a twisted perspective you have.”

But not all members of the Ex-Mormon community liked it. Some foresaw the backlash that would result and lamented how it would tarnish the image of all of them. These Ex-Mormons were only worried about how it would hurt their image. Others were worried that it would hamper their efforts to sow apostasy in the hearts of others. “I have worked hard to make exMormonism respectable and show that we are heroically tossing open the curtain on an evil secretive cult for the benefit of those who have been harmed by it all.” Another member of the Ex-Mormon Reddit was concerned that this would make his efforts to corrupt his mother and lead her to apostasy difficult, “I have been very carefully loading her shelf with a couple items, this stunt would undo that… use your creativity to damage and destroy their credibility.”

From what I saw, only one lone voice has pointed out that gay sex in the temple may be witnessed by innocent church members, including children:

Well, yeah, in addition to trespassing, bigotry, and the targeting of a religion for hateful purposes. I guess everyone else was too worried about their public image and efforts to destroy their family members’ souls to think about that.

Remember That Poor 12-Year Old Girl Who Came Out As Lesbian In Sacrament Meeting?

“There’s children that are convinced death is the only answer because their god doesn’t accept them for how they are and who they are. In June of this year I got a private message from somebody saying, “I have a video of a girl bearing her testimony in church coming out as gay and they shut her mic off…” Savannah: that is the bravest kid, the bravest person, that I have ever met in my life… I posted that video online on June 14th… so I started having all these media requests pouring in via email saying, “Can we share your video?” I mean big ones, CNN, and the New York Times carried it, the Chicago Tribune, the Daily Mirror, hundreds and hundreds of newspapers around the world that were publishing this and posting it on Twitter… by the end of the day on June 30th one hundred million people had seen Savannah’s testimony. By the end of August of this year, so after two and a half months, three hundred million people had seen her testimony…”

The Anti-Mormon claimed of his phony temple recommends, “I made many of those recommends myself and obtained the rest without any false pretense on my part at all.” Well, that’s not really true, according to members of the Ex-Mormon Reddit:

They seemed to be under the impression that the temple recommends they sent to the Anti-Mormon would help people experience the temple with their families. That’s what he led them to believe in the interview with Anti-Mormon John Dehlin:

John Dehlin: “… But I’m seeing your eyes tear up. And I just want to make clear that, what I’m hearing from you say is you were moved and heartbroken at how the church used temple access and temple worthiness as a way to divide families and exclude people, and that was the emotional motivation for you sharing temple recommends… But I’m saying, you were coming from a place of empathy…”

John Dehlin: “…and sadness for the way the church’s policies were hurting people. Is that true? Am I putting words into your mouth?”

Mike Norton: “Absolutely.. I just thought to myself.. I still believed in Christ, and thought, I just couldn’t comprehend the possibility that Jesus Christ would tell parents, “Oh, you haven’t given enough money to the church, so I’m sorry you can’t attend your only child’s wedding, I’m so sorry, so sorry.””