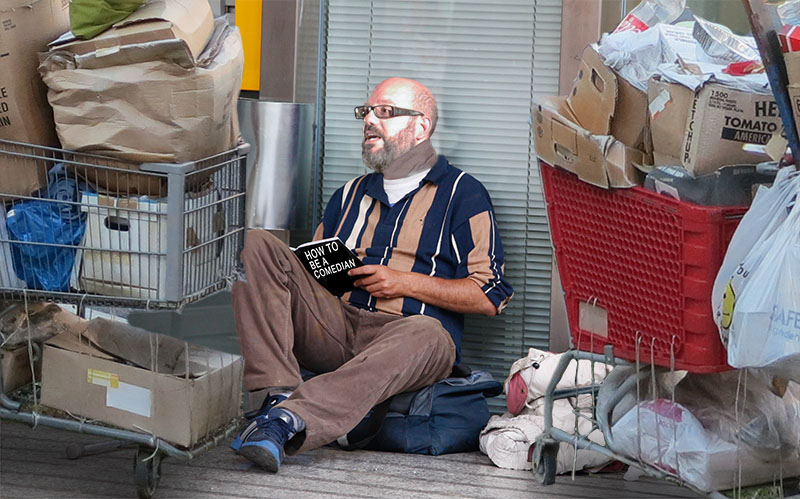 It’s no secret that I’m a huge fan of comedian David Crotch. The man is hilarious, and he has a big heart. I fell absolutely in love with David when he stood up to Larry The Cable Guy’s anti-gay and racist jokes. Bigotry is not acceptable, absolutely never, and if you are going to make fun of someone, at least make it clever, dude. As David wisely put it: Larry, “your stuff isn’t necessarily anti-gay but rather stupid and easy.”

David Crotch illustrated this point in a magnificent way when he came up with a joke that nobody has ever thought of in the history of the world: make fun of “Mormon underwear.” Like, why has nobody thought of this?! When I saw David’s photoshopped image of a man wearing the sacred temple garments, I literally rolled on the floor screaming with laughter for hours–perhaps days. It is literally the most novel, intelligent, innovative humor I have ever seen. In that Monty Python sketch of British soldiers killing Nazis by shouting the “world’s funniest joke,” there is no doubt in my mind they were describing this photoshopped image created by David Crotch. No wonder he earns the big bucks!

Then he reportedly followed it up with hilarious jokes about beating to a bloody pulp people who have different political opinions than him. Hilarious, right!?

As a fellow champion against bigotry, it is great to see intelligent, brave guys like David Crotch fight for the LGTBQIAA+ and religious minorities by mocking sacred Mormon (oops, not supposed to say that!) apparel. This goes a long ways towards healing the inequalities and social divisions of our country. Of course, the haters were out in full force denouncing David Crotch’s brave stand. Fox News sensationalized it. Breitbart went off on it–though, at least Breitbart didn’t say a single word about the Anti-Mormon bigotry, you gotta give them credit for that! TBMs were whining about it on Facebook. Blah blah blah.

Another thing I like about David Crotch is his style. A long messy beard, hipster glasses, blank expression, and his glossy bald head. Everything a feminist like me dreams about. It all just screams “ally in the fight against patriarchy.” Now, here is a guy who will never, ever be intimidating in any way. If I saw him walking down the street, I would toss a quarter in his cup and be on my way. This is exactly the aesthetic that I wish every male would have.

The fact that David Cross is at the top of comedy in America just shows the peaks to which the entertainment industry have risen. Always pushing new ground. Fighting for tolerance and love. Intelligent and brave. Feminists like me rightfully idolize the billionaire owners of big corporations like HBO and 20th Century Fox, because they make the world a better place and they know what is best for me. It’s time that Mormons (oops, I did it again!) realize this as well. If for some weird reason you don’t get the atheist jokes (probably because you aren’t smart enough), just pretend it’s funny while batting your eyes and twirling your hair in your fingers like the rest of us feminists do.