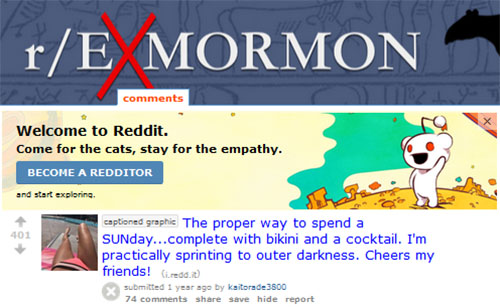 Mormons teach girls that the worst sin they can commit is to show bare shoulders. We’ve come a long way since my seminary days, when the instructor shamed me for showing my upper arms as I came in late. But millions of Mormon girls still say they are being treated like objects and shamed because of the thoughts “they put” in boys’ heads. Why are we as women responsible for the thoughts boys decide to have? The church teaches that our bodies are temples, after all. Why are women told that their bodies are evil and shameful? 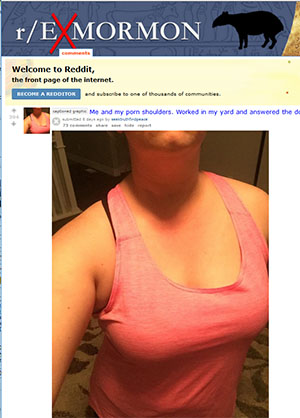 The Exmormon Reddit is a support group where Ex-Mormons, liberal LDS members, and feminists like myself cope with toxic church teachings. It is a safe space where one by one we can stand high up and talk about how much better we are than the traditional Mormons. Women and girls who suffer under the Mormon patriarchy are encouraged to liberate themselves and upload photographs with little clothing on. A supportive group of elderly Exmormon guys give these young girls encouragement as they examine these photos of the young girls and share them with friends.

“Recently we have become aware of some incidents in which exmo’s have been contacted by individuals seeking to hook up. While there is nothing wrong with hooking up, there were several signs that these people might be predatory. These advances were unsolicited and unwelcome. One pm-er copied and pasted the same message to multiple recipients. Some seemed to be targeting BYU students. And all used several of the strategies listed in this post….

The decision to form a relationship (of any kind) with someone you meet here is a personal one. We aren’t suggesting that you shouldn’t ever make friends or even date other exmo’s. But please, please be aware that exmo’s have vulnerabilities. Don’t exploit others’ weaknesses, and be aware of your own. Protect yourself! And if someone contacts you in a way that makes you uncomfortable, please report it, either to the mods here or directly to the admins, who will be able to see the pm’s. People who harass others usually harass more than one person.” 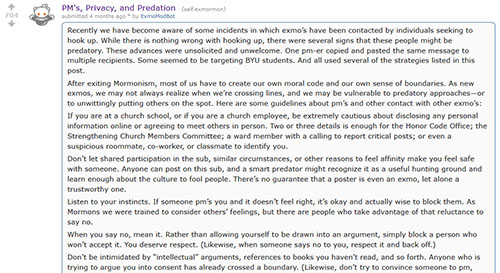