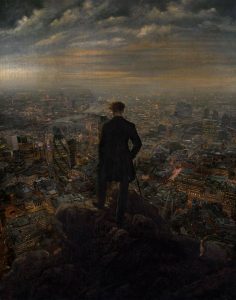 The other ten spies were absolutely correct. The Canaanites were too established, too numerous, too big to fight. A band of squabbling tribes that just spent forty years sleeping in tents didn’t have a chance against them. That’s the point. They haven’t had a chance since the firstborn of Egypt were sacrificed for their freedom. Seas and deserts and armies have been in front of them, each one more than enough for the (almost certainly less than five million strong) host of Israel. Yet here we are. The Jordan River.

Your ancestors lived here, Joshua. Were they better men than you? Will your name be spoken in the same hushed tones as theirs are? Will the trial that breaks the sons of Abraham happen on your watch? If you were Moses you would have been leading them already, but Moses is gone, and it’s up to the son of Nun to walk the last mile.

The lesson of a lifetime. You must learn to walk to the edge of the light, and then a few steps into the darkness; then the light will appear and show the way before you. Does the Lord tell Joshua every detail of the conquest of Canaan? Does he need to? A fearful man could know the Lord’s plan and still flub it. Believe me, it happens. Knowledge isn’t necessary. What is required is to be strong and of good courage, and to walk the Ark into the Jordan, and feel the water deepen around your ankles.

And down the walls tumble. The sons of Abraham are once more established in righteousness, in freedom, in the fear of the Lord. And Joshua stands before the ashes of Jericho, before the booty of Canaan, the fields they did not plant and the houses they did not build and the slaves they did not hire, and he asks his folk to make the decision he already made, before ever the sword of the exile rang in these cities of giants – Who will you serve?

And they tried to remember, and they nearly did, and when the long-promised Messiah came to that oft-conquered land he did not bear the name of Abraham the father or Moses the liberator or Aaron or David or Solomon. The name on the tablet on the bottom of the living-water river is Jesus, Yeshua, Joshua, the name of a man who faced an impossible task but was strong and of good courage.