Why did they push the Mormons out? As the Boy Scouts changes names to “Scouts BSA” (though at this point they might as well call themselves Soy Scouts) many former scouts are asking this question.

Why did BSA decide to antagonize a religion that made up 20% of their organization? BSA has been losing members and income every year, so why would they push away the fastest growing demographic of members in the organization?

Maybe they are just making terrible business decisions? Organizations have been known to push away their base for the sake of political correctness, after all. But looking at BSA’s strategy for growth, this business decision doesn’t just appear idiotic, it’s plain suicidal.

Just look at how they are trying to get more members. Their plan for “reaching the next multicultural generation” is to “use rappers to promote Scouting.” I’m not even joking. Another suggestion is to “make the uniform optional” and “have T-shirts that are cool” instead. This is BSA’s master plan to replace the Mormon exodus? T-shirts and rappers? Yeah that’ll work. BSA says another important way of “connecting with Millenials” and finding “new parents and volunteers” is to get rid of faith based organizations. Here is a slide from their presentation with a big red slash through “faith based organizations.” 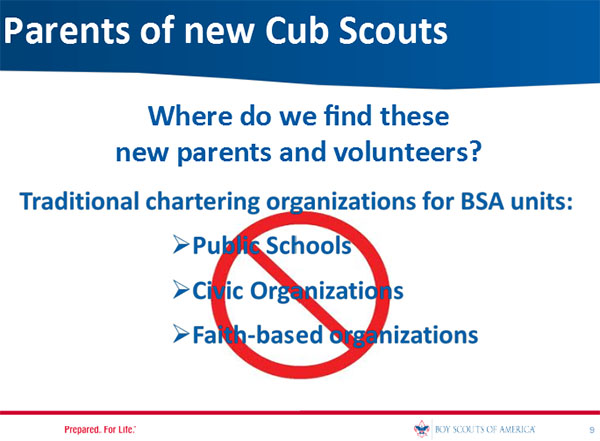 BSA doesn’t make their contempt for churches a secret. Suddenly it becomes clear this was a purge of Mormons, not just two groups going their separate ways. It was a purge of faith based organizations.

This push for “diversity” in Boy Scouts has resulted in lower membership, so why are they doubling down? It’s not about gaining members but shifting Scouting values. When you approach diversity by throwing everybody in the same pot you end up with a bland organization that has no unique characteristics so as not to offend any unique group. You have the unisex bathroom with tiles, a sink, a toilet, and zero amenities. You have the Soviet Union era housing projects with drab concrete units and no decoration. In a group like Boy Scouts, this ‘equality for the sake of diversity’ effort will result in less activities that disenfranchise any one class of people and less unfair standards. But this is exactly what the leaders want, because then it will be purely about ideology.

We already see the next phase in motion: removing the Duty to God award. Don’t just remove churches, remove religion completely. That’s only fair to atheists after all! “It’s the last hurdle to eliminating discrimination completely,” someone remarks on the BSA reddit page. 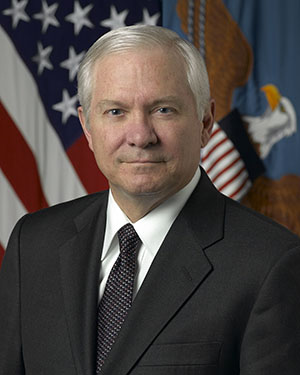 Look at who the National President of the Boy Scouts of America is, a member of the Council on Foreign Relations. Look at who the previous President was, who initiated the purge of Mormons: the former Director of the CIA and another member of the Council of Foreign Relations. We are talking about Deep State leadership. Robert Gates worked 26 years in the CIA & National Security Council during the period of time when the Patriot Act began eroding our freedoms as Americans.

We can see where this is headed.

In ten years what will scouting look like? People involved in scouting have told me that merit badges these days have less to do with merit, and more about memorizing and following a prescribed creed. Eventually, it will get to the point where you won’t learn useful skills in scouting at all. It will be about programming the kids to be good citizens of their country. A scout is trustworthy? You can trust your public school teachers to teach you all about social justice. Loyal? Your loyalty lies with our ideology of equality and justice. You get the idea. I don’t think they will change the scout law that the Left hates so much. Rather, they will twist the meanings.

It takes a village to raise a child, whether you like it or not. You are not allowed to keep this old organization that teaches your children traditional values and family. No, these CIA and Council of Foreign Relations people will dictate what opportunities your child will have. This lack of freedom for parents is part of the attack on the family. The BSA made these changes over the heads of parents, churches, and local leaders. Why? It appears to indicate that scouting is under more government control.

Fake Mormon Stephen Stromburg of the Washington Post says Mormons are retreating “from reality” by breaking away from the Soy Scouts. Retreating from reality? I guess we shouldn’t be surprised to see such strong language from a media organization with very close ties to the CIA.

History repeats itself. In World War Two, the Mormon church pulled out of Germany’s boy scouting program when Hitler seized control and used scouting to instill Nazi values in children. In the excellent book Mormons And The Swastika by David Conley Nelson, we can see the similarities to what is going on right now with BSA.

The LDS church insisted on rigid control and to be included in leadership of German national scouting. The Nazis didn’t like this. Over on the BSA reddit, we can see how leaders feel about Mormon influence over scouting. It’s no secret that they resent Mormons. So the church pulled out completely, and just like the media narrative today, they were ridiculed for “retreating” from scouting.

Where will this all lead? It is ominous when the LDS church pulls out of any organization, akin to missionaries pulling out of a country, but the fact that it so closely resembles the events of Nazi Germany is too disconcerting to ignore.