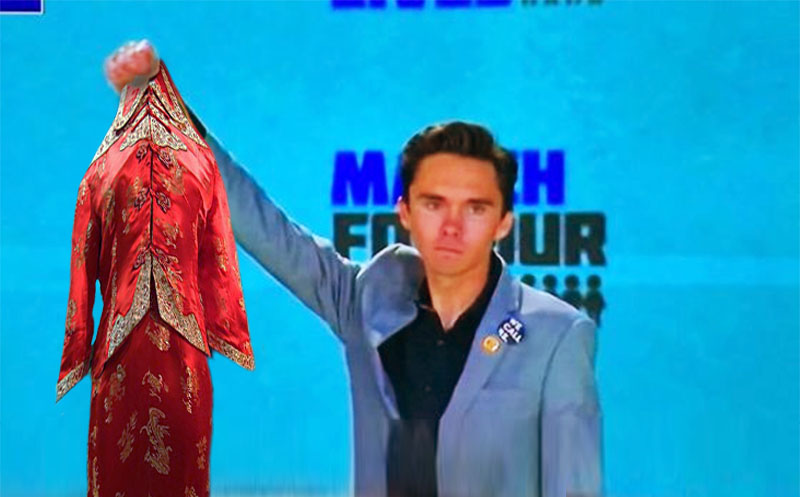 It was the photo that shocked the world!

I’ll never forget where I was when I first saw the photo. Me and my friend from upper-east side Manhattan were sipping soy espressos at the Gateway Mall in Salt Lake, discussing the historical oppression of Chinese railway workers by white middle-class high school girls. Then the news broke. There she was, crouched with young men above her flashing violent gang signs. I literally spat out my drink.

For years, progressive women around the country have called for common sense laws to prevent this kind of racism.

Recently the Senate defeated a measure to require background checks on women who purchase dresses at fashion shows or on the internet. They defeated it even though 70-90% of Americans support measures which would eliminate existing loopholes and prevent racist Americans of white skin color from encroaching on marginalized cultures. Right now, you can literally walk into a fashion show and buy any dress you want, with no background check! Even if you are a felon or have a history of mental illness!

Did they not see the thousands of grass-roots Americans across the country who skipped class to protest these kinds of intolerable atrocities in our schools? Enough is enough! White girls cannot just wear anything they want.  It is time to stand up to the fashion lobby and stop racists from wearing clothing that offends people around them.

As feminist Mormons, we understand that it is hateful to focus on the dresses women wear instead of the women’s achievements. But that only applies to dresses that offend non-marginalized men. Modesty standards teach women not to choose clothing that would give men “unrighteous” thoughts, as if it is women’s fault what men decide to think. So when a woman spontaneously decides to wear a dress that just happens to show cleavage, that makes her responsible for the clothes she is wearing? We are only responsible for our appearance if it offends minorities–or at least if CNN tells us it should offend them.

Women everywhere are saying “we need to get past these patriarchal rules and encourage women to wear whatever they want! Except clothes that offend nonwhites, and female Islamic clothing.”

Luckily this time, a cyber-sleuth saw the photo and alerted everyone, so that a collective mob of angry social justice warriors could shame and harass this girl for wearing a dress that kinda has a Chinese motiff. But what we need is our leaders in Washington to act to preserve the rights of marginalized and oppressed communities. We need media platforms to more effectively harass people and to get high schoolers to protest against their own best interest.

Isn’t it about time?